The Duke of Wellington is a character in Blackadder the Third and Blackadder: Back & Forth, played by Stephen Fry.

The Duke of Wellington, portrayed as a loud, bellowing and bellicose warmonger with a tendency towards casual violence aimed at the serving classes (in particular the incompetent and buffoonish Prince Regent, who was then disguised as his own butler). Eventually he kills the Prince Regent, thinking he is a butler, meaning Blackadder takes the Prince's throne.

In Blackadder: Back & Forth, he is just about to tell the Duke of Darling his battle plan for the Battle of Waterloo when he is crushed by Edmund and his time machine.

This accident causes the British to lose the Battle of Waterloo. Blackadder then steals his boots (to claim his £10,000) and heads off to a different time. When Blackadder realises his mistake, he comes back dodging the Duke and instead wishes him luck in the battle. 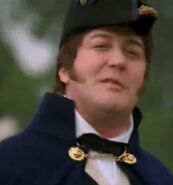 Duke of Wellington from Blackadder: Back & Forth

Community content is available under CC-BY-SA unless otherwise noted.
Advertisement