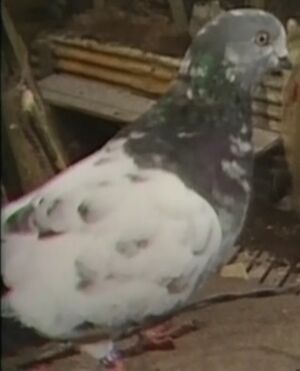 Speckled Jim is General Melchett's favourite carrier pigeon who appeared in the second episode of the fourth series, "Corporal Punishment". He was raised by him and apparently the General's only childhood friend.

Upon delivering a telegram to the front line he is shot by Captain Edmund Blackadder with a revolver just after he says 'Come on George, with 50,000 men getting killed a week who's going to miss a pigeon?' What Blackadder does not know is that Speckled Jim is General Melchett's favourite pigeon. Blackadder also discovers too late that according to the telegram the shooting of carrier pigeons is now a court-martial offence, so he promptly decides to "eat the evidence for lunch".

Captain Blackadder is quickly found out by Melchett and Darling, in no short part due to George and Baldrick's incompetence. He is then sent to court over the matter of Speckled Jim's death (and disobeying orders) and sentenced to death. In the nick of time, a telegram that comes through saves him from the firing squad.

Retrieved from "https://blackadder.fandom.com/wiki/Speckled_Jim?oldid=9809"
Community content is available under CC-BY-SA unless otherwise noted.